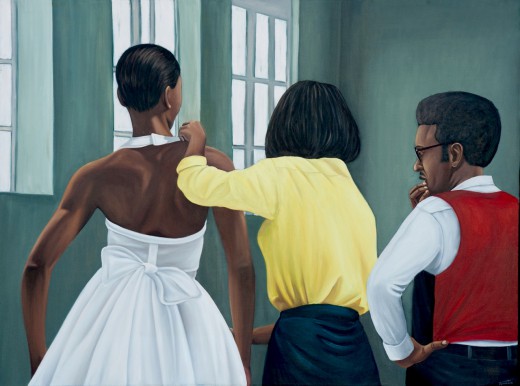 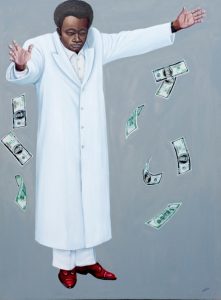 Zemba Luzamba was born in 1973 in the Democratic Republic of Congo. After studying art at school in his native Lubumbashi, Luzamba (then Lutamba) enrolled for further studies at the Evelyn Hone College of Applied Art and Commerce in Lusaka, Zambia. Reticent to return to the uncertain political environment of the DRC, the twenty-seven year old artist headed south to Cape Town in South Africa, where he has lived since 2000. Over the last decade Zemba has become a visually eloquent and prolific chronicler of his experiences as a migrant African in a country with an ambivalent and often violent relationship with its continent. 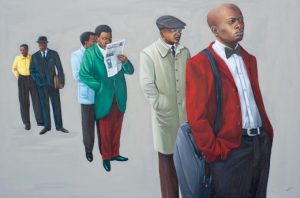 With only two solo exhibitions and a modest number of appearances in group shows, few works in public collections and fewer public commissions, Zemba is an emergent artist who does not yet have high visibility in the global context. I first saw Zemba’s work as part of the Voyage Ensemble project, a collective of refugee and local artists funded by Scalabrini House, a private organisation founded by an Italian priest in Cape Town. I was impressed by Zemba’s technical proficiency, coupled with his intimate account of the lives of transnational migrants.

His largely narrative paintings include vivid scenes of everyday life depicting crowded residences, tired nightshift workers, and determined students working with limited resources. There were also representations of illicit border crossings, and other paintings depicting the hardship experienced by illegal migrant labour in South Africa. Recently, Zemba’s focus has broadened, his gaze extending to the lives of migrants who are making something of their lives, with a particular interest in leisurely activities such as the playing of cards and snooker. Even more intriguing have been images of black tennis players, dressed in whites, with entirely black audiences. Then there are numerous images of black musicians, mostly in formal (western) attire, playing in large ensembles. 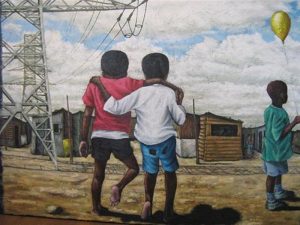 Many of Zemba’s images, it transpires, are based on photographs he has taken over the years. What is intriguing is the difficulty he poses to the viewer in placing the images, spatially and temporarily. Are we dealing with memory, observation, or imagination? Are these scenes witnessed in the ‘new’ South Africa, or the ‘old’ Congo? While he is evidently familiar with his subjects, their lack of specificity introduces a degree of otherness to his images. With characteristic understatement, Zemba is a contemporary realist providing lifelike accounts of ordinary subjects and stopping short of overt commentary. At times he hovers on the borders of satire, leaving the viewer wondering what to make of his shadows, which appear as innocent formal devices to suggest pictorial depth or provocative allusions to mimicry of colonial lifestyles in the lives of postcolonial elites. Similarly there is the sartorial choices of his subjects who are almost always dressed in formal western attire. Is this pure observation, aspiration, or critique?

Many of Zemba’s paintings also allude to questions of power. This is relatively explicit in the images of individuals who risk the dangers of border crossing, pitting their desire for a better life against the immense resources of a state determined to curtail illegal immigration. It is implicit in his images of immaculately dressed musicians patronised by (an unseen) clientele with money to spend. It is also implicit in his images of solitary and rather desolate figures posed in nuanced contrast to other paintings with individuals who show degrees of affluence and confidence. Zemba’s work is bolstered by his sensuous use of paint, his skilful observation of body language and formalist predilection for structured and relatively shallow pictorial space that emphasises its immediacy and proximity to the space occupied by the viewer. 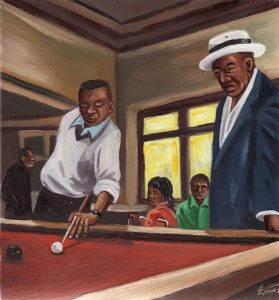 Zemba Luzamba remains in South Africa where he continues his quest as an artist. The evident skill and evocative qualities of his art should garner him more recognition except that the international discussions of diaspora, transnationalism, cosmopolitanism, migration, and hybridity that dominate the discourse of contemporary African art do not have space for painters such as Zemba, for whom these notions are not intellectual debates but integral parts of their everyday existence. The artist negotiates his identity as a postcolonial African artist in an African country with an increasing predilection for insidious xenophobia. It may be this awareness of the gravity of his situation that makes him such a sophisticated chronicler of moments in time, a keen and alert witness to ordinary exchanges between fellow human beings, exchanges that hint at consequences, lending them a weight that defies their casualness.